As you enter Dalyan you will be welcomed by the sight of a Turtle statue and fountain. Dalyan is famed as much for it association with turtles as it is for the tombs.

Dalyans’ local Iztuzu beach is also known as Turtle beach as it is the breeding ground for the endangered Caretta Turtle. These beautiful, reddish-brown shelled creatures measure over a metre in length and weigh up to 130 kilos. Females always return to the beach where they hatched, and they nest at Iztuzu between May and September.

The beach can also be accessed from Dalyan by road via Gocek. The end of the 4km beach serviced by road is home to the Government funded Turtle Sanctuary and to the Kaptan June Museum and Sea Turtle Conservation Foundation. Kaptan June otherwise known as June Haimoff famously campaigned to save Iztuzu from hotel construction in 1987 which led to its designation as a conservation zone.The four mile stretch of unspoilt beach was also awarded Times Travel Green Spaces Award 2006

As well as the sea turtle you will also have the opportunity to see the black pointed nosed fresh water (or Nile) turtles popping up by the riverside in town, terrapins sunning themselves on the banks and tortoises in the country, at Kaunos and on the road sides.

Nature lovers should bring binoculars and head up to the lake, as the boat captain cuts the engine and drifts silently through the reeds there’s the chance to enjoy the wetland areas rich in birdlife and to see many species in their river habitats including kingfishers, storks and herons. Anyone taking a trip on the water stands an excellent chance of spotting flying fish and, of course, turtles. 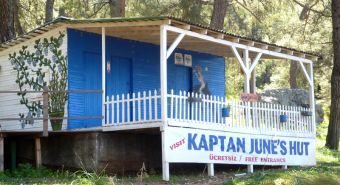 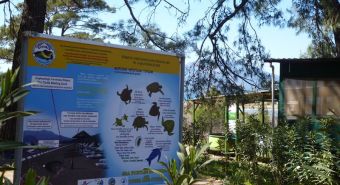 Lovely town, lovely place, lovely hosts! Will have to come back soon!